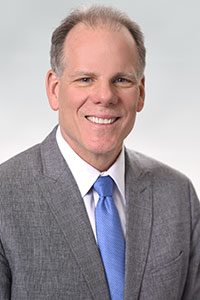 Dr. Hutson was born and raised in Miami, Florida, graduating from Coral Gables High School in 1978. He attended the University of Florida and graduated with a zoology degree in 1983. He continued with his post graduate education in the field of microbiology.

Dr. Hutson attended Emory University School of Medicine from 1985-1989. He continued at Emory for his Pediatric Residency finishing in 1992.  He was selected as Chief Resident in Pediatrics for 1992-1993.
Dr. Hutson was Board Certified in 1992 and continues to meet the requirements of Maintenance of Certification in General Pediatrics.

After his residency was completed he worked for one year at Childrens Medicine in Lawrenceville.
Dr. Hutson joined Childrens Medical Group in 1994 and has practiced at the Atlanta office during his tenure.  He has served on numerous committees in the community and currently sits on the System Medical Executive Committee and System Peer Review Committee at Childrens Healthcare of Atlanta.

Since 2009, Dr. Hutson has been listed multiple times as one of Atlanta’s “Top Doctors” in pediatrics by Atlanta Magazine.
Dr. Hutson comes from a family of doctors going back 5 generations. He and his wife,Lisa, live in the Emory University area with their 2 daughters. Dr. Hutson enjoys road and mountain biking, boating, and skiing.  His areas of interest include sports physiology and the young athlete but he enjoys the challenges of all age children.  What he loves most about pediatrics is caring for the whole family, not just caring for the child.